AMC’s “The Killing” Sometimes they’re worth the hype, folks!

I guess the title spoils any mystery as to what I thought of the two hour pilot episode of The Killing, right?  AMC is certainly stepping up to the plate and giving a big challenge to networks such as HBO & Showtime over which network offers the best original series in the last few years and moving forward.  Never before on commercial networks have we seen the quality being brought forward and their own boundaries as a network being pushed as we have in the last couple of years.  AMC pissed off a lot of viewers a handful of years back when they switched to the format of editing their movies and including commercials, however their original programming, including Mad Men, & The Walking Dead have made strides to not only bring those jaded viewers back, but a ton of new viewers along with them. 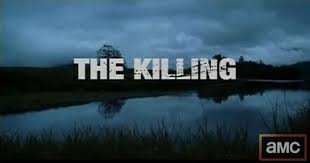 The Killing picks up immediately following the murder of a teen girl who was last seen by most at a school dance. She was supposed to be staying with her friend for the weekend, but never made it to her friend’s house for reasons we don’t quite know yet.  Her parents were camping for the weekend and out of range for any communications to be possible.  Like other murder-mystery shows, everyone seems to know a lot more than they are willing to testify to, and we are bound to find out a lot about the victim over the course of the series (and I have a hunch a lot her parents didn’t happen to know either).

Stop me if you’ve heard this before, the detective duo heading up the investigation is one on the verge of retirement, and the other has just been transferred to take over her spot.  I know, I know…..this dynamic on the surface has been done plenty of times before, however, here it is presented a bit differently due to the circumstances surrounding the retiring detective.  There is also more to her character I believe, than we have seen so far. (That goes for both the detectives I am thinking).

The end of the epic 2-hour pilot, leaves us with the discovery of a bloody crime scene discovery at a “teen hideout” spot in the basement of the school, which no doubt get some more explanation as episode two opens this Sunday.   The pace of the show was slow but deliberate.  With the introductions of what seemingly are the main characters we were given a nice setup of things to come, who the nice guys are, the jerks, the slimeballs, the ones we aren’t so sure about, and all the other classifications you can think of.

Even with the length of the pilot, I was left wanting more.  The fact that the show ended the way I mentioned above made me want to dive into the following episode as soon as possible.  If you have time to fit in one more show on your schedule, or even ready to drop one or two from your current tv-viewing routine, I highly suggesting adding AMC’s “The Killing” to the routine.  When the credits roll, you will be left with the same question as the rest of us…..

3 responses to “AMC’s “The Killing” Sometimes they’re worth the hype, folks!”